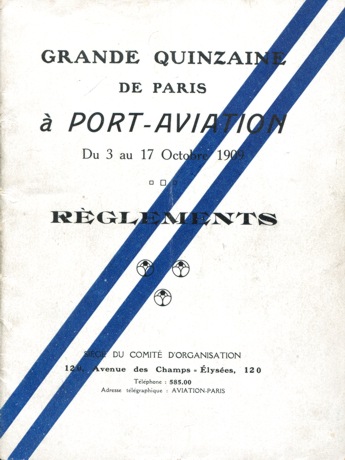 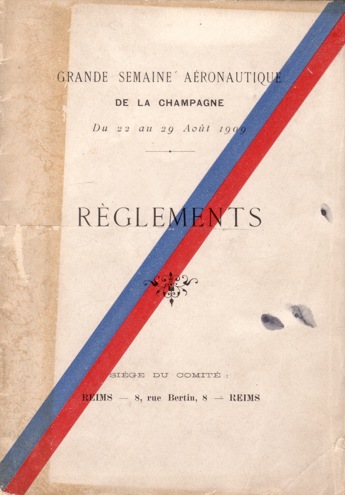 When you think of air racing, you probably think of brightly painted planes with screaming engines, flying wingtip to wingtip, steeply banked around high-G turns. Things were different in 1909:

Below you will find the regulations of the 1909 Blackpool Aviation Week, which are quite typical of the era:
- - -
REGULATIONS

Art. 1. With the exception of events No. 5 and 6, all the events are open to competitors of any nationality, and may be competed for by any competitor duly qualified under the rules of the F.A.I.

Art. 2. The various events on the programme are open to all types of machines heavier than air. Any machine, without distinction of power, form, method of starting or of propulsion, is admitted under these rules.

Art. 3. Only one prize in any given event can be won by a competitor, and in the event of there being only one competitor the second and third prizes will be merged in the general prize fund.

Art. 4. No machine taking part in any of the events of this programme may be removed from the ground before the last day of the meeting, except by special permission of the Sports Committee.

Art. 5. All machines must display the number allotted to them by the Sports Committee, and this number, in figures not less than 2 ft. in height, will be affixed in the manner indicated to the competitor by the Clerks of the Course.

Art. 6. The sheds for the housing of the machines will be provided free of all cost to the competitors by the Sports Committee, but the Organisers will not recognise any responsibility which such concession may entail. Competitors are responsible for the proper guarding of the sheds allotted to them, as also for any damage caused to their machines by themselves or their servants, or third party. Their special attention is drawn to the danger of damage by fire, storm, tempest, &c.

Art. 7. No event may be competed for except during such hours as the Red Flag may be flying from the official signal mast, and permission must in all cases be first obtained from the Clerks of the Course before starting for any of the events in the programme.

Art. 8. No competitor will be allowed to start in any of the events until permission shall have been given him by a Clerk of the Course, whose duty it shall be to see that the official Timekeepers are duly advised of such start.

Art. 9. All distances and all times will be reckoned from the moment the competitor crosses the starting line in flight, and it shall be the duty of the Clerks of the Course to at once put up a signal should such start not be adjudged a valid one.

Art. 10. The course is marked out by five Mark Towers, and all competitors must pass outside such towers when taking part in any of the events of this programme. For purposes of recording the distances traversed in any event, such distance shall be reckoned from the last mark tower passed, in the proper way (i.e., on the outside) by the competitors, and in all events where speed is the deciding factor the time shall only be reckoned from the passing of the starting and finishing line in flight, at least one complete circuit of the course being thus necessary, and only completed circuits being reckoned in all speed contests.

Art. 11. Any competitor touching any part of the mark tower in the course of any event shall not be held to have passed same, and must return and pass same in the proper manner, failing which his flight shall be held to have ended at the last mark tower properly circled.

Art. 12. In all events machines must travel in the same direction as the hands of the clock, except under special permission of the Clerks of the Course given to the competitor in writing or recorded in the record book kept in the Timekeeper's lodge.

Art. 13. A record book will be kept in the Timekeeper's lodge under the care of the Clerk of the Course specially designated for this purpose, and is shall be the duty of such official to record therein every properly made start by any competitor for any event of this programme throughout the week.

Art. 14. The Clerks of the Course are empowered to affix to any machine taking part in any of the events of the programme any device they may deem advisable for the purpose of recording if the machine to which such device shall have been affixed shall have touched the ground in its journey round the course.

Art. 15. The official flying hours are from 10 a.m. to sunset, and events may be competed for (subject to Rule 7) at any time within these limits; provided however that no competitor starts in any event after 4.30 p.m.; it shall be within the discretion of the stewards of the meeting to prolong these hours, but all flights shall be held to be officially concluded at the hour of sunset as recorded by the Greenwich Observatory.

Art. 17. The responsibility for the proper conduct of the meeting, as also for the carrying out of these rules, is vested in the Clerks of the Course, to whom all protests or complaints must in the first instance be made.

Art. 18. All competitors by the fact of starting for any of the events of this programme shall be held to have made themselves acquainted with these rules and regulations, as also those governing the various events of the meeting, and to thereby undertake to abide by the same.

Grand Prize of Blackpool for Long Distance
(First prize, £2,000. Second prize, £720. Third prize, £280.)
The above prizes will be awarded, in order, to the competitors who shall have completed the greatest number of circuits without touching the ground. This contest is subject to the following rules:
Rule 1. The order of starting shall be by lot, any competitor not starting within fifteen minutes of the time appointed shall lose his turn, and shall then only be allowed to start after all the other competitors have been sent off.
Rule 2. This prize may be competed for on the following days: Monday, Tuesday, Wednesday, and Thursday, October 18th, 19th, 20th, and 21st, 1909, and within the hours appointed by the Clerks of the Course.
Rule 3. It shall be an obligation on all competitors taking part in this event to cross the starting line in flight once at least on each of the above-mentioned days during flying hours, notwithstanding their previous performances; any competitor failing to comply with this condition will be ipso facto disqualified. It shall, nevertheless, be within the power of the Clerks of the Course to waive this condition should the competitor's machine have met with a mishap in transit or whilst taking part in any event of the meeting, which, in their opinion, shall render compliance with this condition impossible.
Rule 4. Every aviator shall give full particulars of the machine he is using, and notify any material changes thereto, as also the nature of such changes.

Prize for Greatest Altitude
(First, Daily Mail prize, £600. Second prize, £240. Third prize, £160.)
The above prizes will be awarded in order to the competitors who shall attain the greatest height on their machines; no prize will be awarded unless the minimum height of 200 ft. be attained. This prize may be competed for on the following days: Tuesday, Thursday, and Saturday, October 19th, 21st, and 23rd, 1909.

Prize for Carrying Passengers
(First prize, £400. Second prize, £100.) These prizes will be awarded, in their order, to the competitors carrying the greatest weight on their machines over one complete circuit of the course. For purposes of this competition the weight of the pilot and his passenger or passengers will be added together, and the prizes awarded in relation to the greatest total weight carried. In the event of an equal weight being carried by two competitors, the prize will be awarded to the competitor completing the course in the shortest time. It is a condition of this competition that at least one passenger of not less than 18 years of age be carried; competitors are at liberty, however, to add any additional amount of weight they may desire in the form of dead weight, such dead weight to be reckoned in the total amount carried. This prize may be competed for on Friday and Saturday, October 22nd and 23rd, 1909.

The "Daily Sketch" Prize for Speed
Presented by Messrs. E. Hulton and Co., Ltd.
(First Prize, £400. Second Prize, £100.)
These prizes will be awarded, in their order, to the competitors completing three circuits of the course in the shortest time. This prize may be competed for on the following days: Monday, Tuesday, Wednesday, Thursday, and Friday, October 18th, 19th, 20th, 21st, and 22nd, 1909.

The " Ashley" Competition for British Aviators.
(First Prize, £250. Second prize, £150. Third prize, £100.)
To be competed for on any type of machine (British or otherwise) to be piloted by a British subject, who shall never have won a race in open competition up to the date of this meeting ; to be adjudged to the competitor who shall cover the longest distance without touching the ground. No prize shall be given unless a distance of at least 250 yds. in flight be covered by the competitor. This prize may be competed for on Wednesday, Friday, and Saturday, October 2Oth, 22nd, and 23rd, 1909.

The "All-British" Prize
Given by the Blackpool Tower Co.
(1st prize, £150. 2nd prize, £100.)
For British aviators piloting an all-British machine, i.e., designed and built in the United Kingdom, and with a British motor; to be adjudged to the competitor who shall cover the longest distance without touching the ground. No prize shall be given unless a distance of at least 100 yards in flight be covered by the competitor. In the event of any question arising in respect of the definition of an all-British machine the question shall be referred to the Committee of the Aero Club of the United Kingdom, whose decision in the matter shall be binding and without appeal. This prize may be competed for on Friday and Saturday, October 22nd and 23rd, 1909.

Prize for General Merit
(1st prize, £300. 2nd prize, £150. 3rd prize, £50.)
The sum of £500 (in three prizes) will be awarded on the conclusion of the meeting to the competitors who, in the opinion of the judges of the meeting, shall have performed the most meritoriously during the meeting.

The Prize for Competitors' Assistants
The sum of £50 will be awarded, on the conclusion of the meeting, for distribution among the assistants of the competitor who shall (in competition or otherwise) have completed the greatest number of circuits of the course during the meeting. The circuits covered by competitors in the course of the Long Distance Race shall not be reckoned in connection with this prize.

Prize for the Slowest Circuit
A cup, value £100, presented by the Manchester Guardian, and £100 added money, will be awarded to the competitor who shall, in competition or otherwise (but under notice to the Clerks of the Course), have covered one continuous circuit of the course in the slowest time. This prize may be competed for on Monday, Tuesday, Wednesday, Thursday, Friday, and Saturday, October 18th, 19th, 20th, 21st, 22nd, and 23rd, 1909.