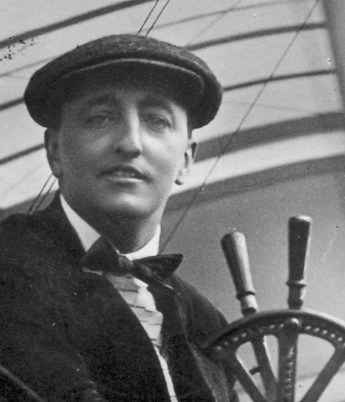 Rougier's characteristic profile was a familiar sight at meetings in 1909 and early 1910. (1) 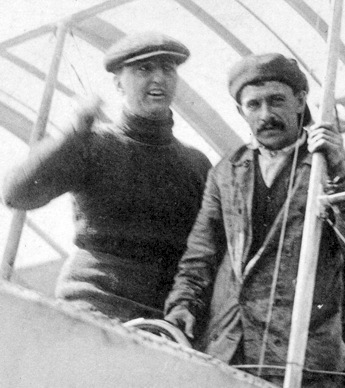 Henri Louis Marie Rougier was born in Marseille on October 28th, 1876. As a young man he raced bicycles and then turned to automobiles. He became a dealer of Turcat-Méry cars, which were built in his native town, and raced them and de Dietrich cars in several Grands Prix during the 1902-1908 period. His best results were third places in the 1906 Gordon Bennett Cup and in the 1906 Circuit des Ardennes, where he also set the fastest lap.

He became interested in aviation in 1908 and bought a Voisin. He made his first flights during the spring of 1909. He was very active at meetings during 1909 and early 1910, setting a world altitude record at 190 m in Brescia in September 1909 and improving it to 270 m in Antwerp two months later.

In May 1910, perhaps as a consequence of his accidents at the Florence and Nice meetings, he announced that he would retire from flying in order to concentrate on his car business. His last performance was at the June 1910 Budapest meeting, where he only made a couple of short flights. He set up a company together with Turcat-Méry for building airplanes and engines. They cooperated with the Odier-Vendôme airplane company, which built a series of mainly unsuccessful designs between 1909 and 1914.

He also returned to auto racing. His biggest claim to fame as auto racer is winning the first-ever Monte Carlo Rally in 1911 in a Turcat-Méry, but he continued to race cars until 1923. His last races were the 1923 French and Italian Grands Prix, where he raced Gabriel Voisin's streamlined cars. After WW1 he briefly built a small number of Rougier cars, based on improved Turcat-Méry chassis.

He continued as a car dealer through the 1930s. After retiring he lived in La Valette-du-Var near Toulon, still active in the food business. He died from heart failure in Marseille in July 1956.

When the first French "Brevets de Pilote" where granted in 1910, Rougier received No. 11, based on the alphabetic order between the first fourteen holders.