Léon Molon in the cockpit of one of his Blériots. (1) 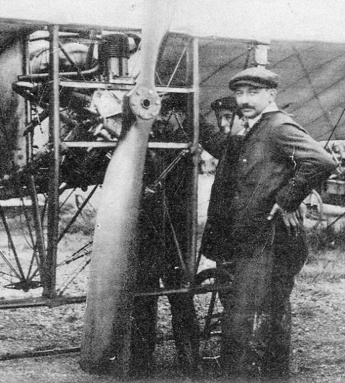 Molon by the 5-cylinder Anzani of one of his Blériots, probably at the 1910 Baie de Seine meeting. (2) 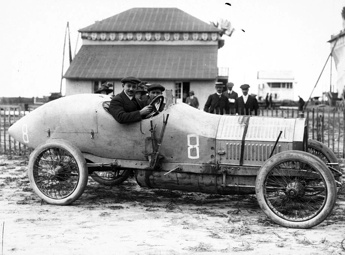 Molon in his Vinot-Deguignand at the 1912 French Grand Prix at Dieppe. (3)

Léon Molon was born on January 12th, 1881 in Arras in northern France. From early on he was interested in mechanical things and he raced bicycles in his youth. His family was wealthy, his parents owned a shoe factory, and already when he was fourteen they bought a Bollée automobile for him. He started racing cars in 1902 and participated in several races for different makes. In 1904 he started a successful automobile dealership and garage in Le Havre, selling and repairing Renault and Vinot-Déguignand cars.

During business visits to Paris Molon got to know many of the famous early aviation personalities at the airfield of Issy-les-Moulineaux, among them Louis Blériot and the Voisin brothers. His mechanical expertise was appreciated by the aviators, who often sought his help. During 1909 he helped in the construction of the Charles Wilkes biplane, which finally made a couple of short flights outside Le Havre.

After Blériot's channel crossing Molon decided that he wanted to become a pilot and he became the first to order one of the new Blériot XIs. He took delivery of it on September 21st, and after learning to fly it he was engaged by Blériot for the upcoming Berlin meeting. He participated in several more meetings, beginning with those of Doncaster, Antwerp and Cannes. He was one of the most active pilots during late 1909 and early 1910, but he was always handicapped by the weak, vibrating and unreliable Anzani engines of his Blériots and never achieving any great results. His last competitive meeting was his home meeting of Baie de Seine, at Le Havre and Deauville, but he continued to fly his own and others' planes in parallel with automobile racing.

During World War 1 he served as flight instructor at Caudron. After the war, in 1919, he relaunched the Aero Club of Le Havre and served as its president for eleven years. He continued to fly light planes for pleasure all his life, owning a Farman F.402 and a Caudron C.510 Pelican. He also continued with his automobile business and participated in several races, for example twice in the 24 Hours of Le Mans, the last time in 1926. In 1944 Molon's garage was heavily damaged by the allied bombings of Le Havre. He passed away on July 26th, 1952.