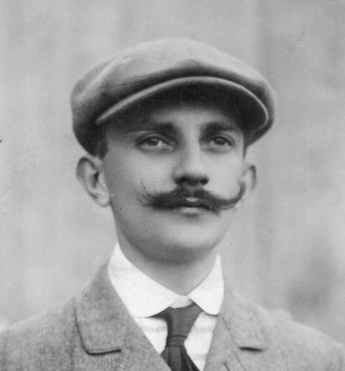 A studio photo of Louis Gaudart. (1) 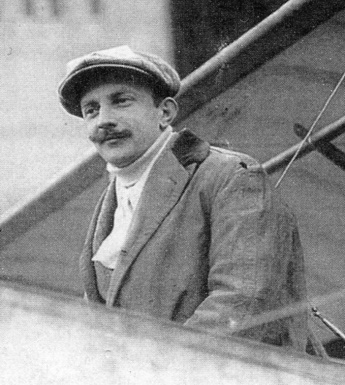 Gaudart slightly more relaxed in the cockpit of a Voisin. (2)

François Louis Gaudart was born on November 17th, 1885 in Pondicherry in French India, the son of an historian and governor. He studied in India, Martinique and Réunion, depending on where his father was stationed, before coming to Paris in 1906 to finish his studies. He graduated as an electrical engineer from École Violet in 1907.

Gaudart became interested in aviation, came in contact with Ferdinand Ferber and learned to fly at the Ligue Nationale Aérienne at Port-Aviation. He made his first flight on March 27th, 1909, in one of the Ligue's Voisins. After quickly establishing himself as a competent pilot he made exhibition flights in Netherlands and Belgium before competing at the October 1909 "Grand Quinzaine de Paris", where he had several minor mishaps but was one of only six pilots to complete a lap.

During the following years Gaudart was employed as a test pilot by many different manufacturers. He piloted the "flying laboratory" biplane of Jean Legrand, one of the first aeroplanes to be scientifically instrumented to record flight data, and also flew for Voisin and Goupy. The "flying laboratory" was modified several times, and was eventually replaced by a new monoplane designed by Gaudart and Legrand. He made exhibition flights in Spain, Italy and France, but was not very interested in "circling airfields" during competitive meetings. He was entered in the May 1910 Lyon meeting, but eventually didn't participate, and in the June Port-Aviation meeting, where it appears he made no flights.

In the autumn of 1910 he, perhaps slightly overdue, qualified for his license and was appointed chief pilot by the Ligue Nationale. During 1911 he worked for Victor Tatin and flew his elegant "Aéro-Torpille". In early 1912 he moved to Louis Schreck's flying school at Saint-Omer. He participated in the 1912 Monaco seaplane meeting.

Gaudart intended to participate with an Artois flying boat in the 1913 Monaco seaplane meeting. During a test flight on April 15th "the world's first test pilot" lost control of the unstable plane, which was perhaps not properly balanced after being equipped with a new heavier and more powerful engine, and crashed into the sea. Several boats were launched to his aid, but he had disappeared into the Mediterranean. His body was finally found by a fisherman on May 10th, close to the entrance of the Monte Carlo harbour.