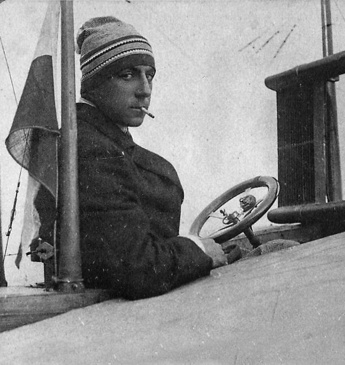 René de Nabat at the controls of his de Pischof & Kœchlin. (1)

Comte René Paul Edouard Carrère de Nabat was born in Paris on January 6th, 1885. He was first mentioned in the aviation press around September of 1909, flying for de Pischof & Kœchlin at Port-Aviation. He participated in the October 1909 "Grand Quinzaine de Paris", where he only made some short flights, one of them ending with a crash. In early 1910 he disappeared from the pages of the aviation magazines, perhaps coinciding with the breakup of the partnership between Alfred de Pischof and Paul Kœchlin.

He was more famous as a painter, under the name René Carrère. He made portraits of several celebrities and his work was presented at several exhibitions. During the Great War he served in the artillery and was decorated with the Croix de Guerre. He tried his luck as actor and film producer, making two movies in the 1920s. He was also a sportsman. He was a successful fencer at amateur level and played golf.

He never qualified for a flying license.