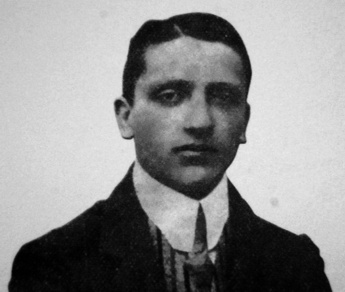 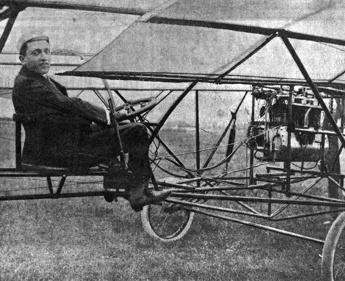 Da Zara at the controls of the Miller "Aerocurvo" at Brescia. (2) 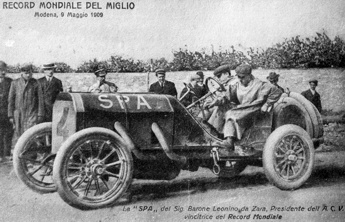 Baron Leonino Da Zara was born in Padua on August 11th, 1888. His father was Leone Da Zara, a very rich landowner, local politician and philanthropist. Leonino was born illegitimately; his mother was Elvira Lunardi, a maid working for the family. The fatherhood was recognized after one year and the couple married.

He grew up at the large family estate in Casalseruga and studied law at the university, but never completed his studies. At young age he developed a passion for engines and driving, and only twenty years old founded the Automobile Club of Veneto. He became its first president and organized race meetings, in which he also participated. In 1909 he set speed records over 500 metres and one mile, driving an SPA.

1909 also saw him getting involved in aviation. He participated at the Brescia meeting with the Miller "Aerocurvo", but the machine was unable to leave the ground. He bought a Farman and learned to fly at Mourmelon-le-Grand. In November 1909 he opened Italy's first civilian airport at Ronchi, near Casalserugo. In 1910 he received Italian pilot's license No. 7. In 1910 he also founded the Italian Aero Club, becoming its first president.

Da Zara was very active in promoting aviation, for example by making the flight during which the first airborne movie in Italy was shot. He also set records of altitude, duration and distance with passenger. In 1912, he launched a subscription in order to purchase aircraft for the fledgling Italian air forces, raising the considerable sum of 3,270,669.28 lire. Da Zara's last aviation enterprise was the organization, together with Gabriele D'Annunzio, of the famous raid when a squadron of airplanes dropped 400,000 propaganda leaflets over Vienna on August 9th, 1918.

Da Zara then launched into writing, first works about politics (he was initially influenced by fascism and friend of Mussolini, but later fell out of favour and was even sent into internal exile) and then fiction, writing many short stories and a couple of novels. He was a pleasure-loving man and managed to spend the entire immense family fortune. He died in absolute poverty in Rome on August 7th, 1958, also afflicted by mental illnesses.