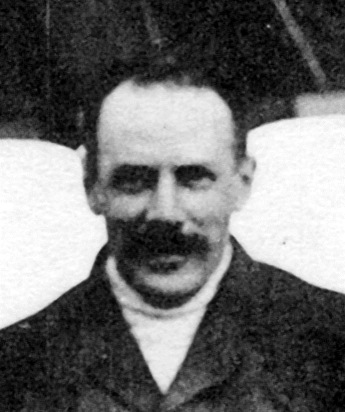 Cockburn reportedly disliked being photographed and this postcard image is one of the few available portraits. (1)

George Bertram Cockburn was born on January 8th, 1872 in Birkenhead, Cheshire, the youngest child of a Liverpool merchant from a Scottish family. He studied chemistry in Oxford and worked as a research chemist at St. George's Hospital in London. In his youth he was active in sports, for example rugby.

In early 1909 he got interested in aviation and joined the Royal Aero Club. He went to France to learn flying and became the first pupil of the Farman flying school in Châlons-sur-Marne. He made his first flight on June 14th, 1909. He was selected to represent Britain in the first Gordon Bennett Trophy race, even though he hadn't made any solo flight longer than fifteen minutes before the Reims meeting. He participated in a couple of aviation meetings in 1910, but quit competitive flying after the death of Charles Rolls during the 1910 Bournemouth meeting.

Cockburn belonged to the group of British pioneer pilots that flew from the Salisbury Plains in England. He was a volunteer instructor for the first four British naval flyers at Eastchurch in 1911.

He apparently quit piloting soon afterwards, but remained active in aviation. In 1912 he became a founder member of the Royal Aero Club's Public Safety and Accidents Investigation Committee. When the Aeronautical Inspection Department was formed in 1913 he became second in command. He was a pioneer of aircraft accident investigations and in 1915 was appointed to the independent post of "Inspector of Accidents", responsible for the Accidents Investigation Branch (AIB) of the Royal Flying Corps. He also held several positions in the Royal Aero Club during many years until his death on February 25th, 1931.