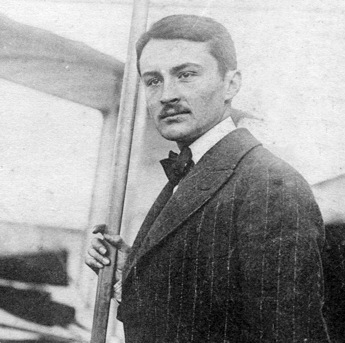 Étienne Bunau-Varilla and his Voisin at the 1909 Reims "Grande Semaine". (1) 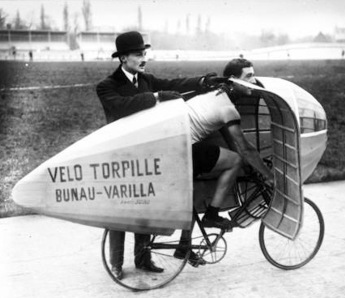 Étienne Bunau-Varilla was born in Paris on May 10th, 1890, the son of Philippe Bunau-Varilla, a civil engineer who had made an enormous fortune as a contractor during the failed French efforts to build the Panama Canal in the 1880s.

After finishing his "baccalauréat" studies he received a Voisin plane as a graduation gift from his father. He participated in the 1909 Reims meeting, where he was the youngest pilot. He had only flown for the first time a couple of weeks before. He only took part in the two Reims meetings in 1909 and 1910.

After his flying adventures he became involved in bicycle racing and together with the engineer Marcel Riffard (later to become the designer of the famous Caudron racing planes of the 1930s) designed a streamlined enclosed bicycle which beat the world speed record, pedalled by the champion Marcel Berthet.

During WW1 he came back into aviation via the cavalry. On May 27th, 1915, he became the first WW1 pilot to become a prisoner of war, flying a Voisin bomber together with General de Goys, the Chief of Operations of the French General Staff Headquarters. An engine failure forced them to land their undamaged plane in German territory near Neustadt during a raid on Ludwigshafen. The general managed to escape, but Bunau-Varilla spent a long time as prisoner of war.

After the war he turned to skiing and became captain of the French national skiing team. He apparently led the comfortable life of an ultra-rich and according to one source he never did a day's work in his life, spending his days at ski resorts and motor racing circuits. He died on December 12th, 1961.