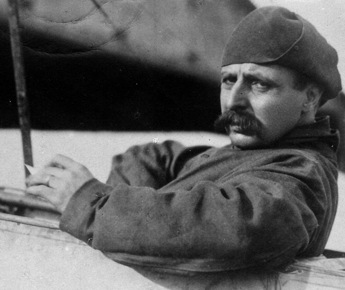 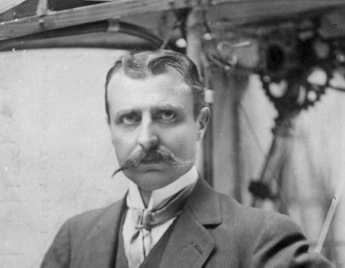 A staged studio photo of a serious airplane constructor (2) 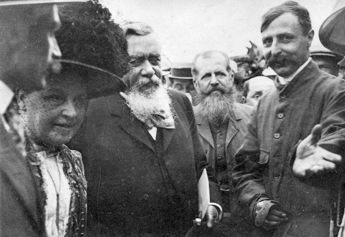 Blériot presenting his planes to the President of France, Armand Fallières, and his wife during the 1909 Reims meeting (3)

Louis Charles Joseph Blériot was born on July 1st, 1872 in Cambrai in northern France, the son of an entrepreneur who was at the time active in the textile industry. He was educated at the prestigious École Central in Paris and after his military service he briefly joined an electrical company. After inventing an acetylene lamp for cars he started his own company. He made a fortune from selling lamps to big car manufacturers, money that he could spend on flying experiments.

He built his first unsuccessful ornithopter in 1899, followed by several more or less unsuccessful types, some of which were developed together with the Voisin brothers. His first successful plane was the late 1907 Blériot VII, which more or less defined the layout of the monoplane.

He made several pioneering flights, including the first out-and-back cross-country flight in France in October 1908. His most famous flight was of course the 32-minute flight across the English Channel on 25 July 1909.

Even though he showed well at Douai and set a world speed record at Reims, his performances during the 1909 air race meetings must be considered a disappointment in view of his status. He had put much hope in the Blériot XII, which eventually turned out to be a failure. The Blériot XI was not yet fully developed. It was handicapped by its Anzani engine and had neither the power nor the range to challenge for the big prizes.

Blériot did very little flying after being seriously injured in a crash in Istanbul in December 1909, but he made a couple of short flights at the 1910 Biarritz and Barcelona meetings. He then focussed on production of airplanes. Blériot took over the remains of the Deperdussin company in 1913 and during WW1 he was the president of SPAD, which produced thousands of planes during the war, the most famous being the "VII" and "XIII" biplane fighters.

The Blériot and SPAD companies were never really successful after the war, failing to get any large-scale production contracts. Other industrial projects also hit difficulties. These troubles took a heavy toll on Blériot, who died in Paris August 1st, 1936 after a heart attack.

When the first French "Brevets de Pilote" where granted in 1910, Blériot received No. 1, based on the alphabetic order between the first fourteen holders.