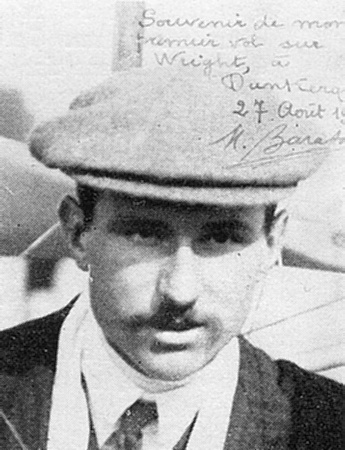 Marcel Baratoux after his first flight. (1)

Marcel Adolphe Baratoux was born in Paris on July 3rd, 1884, the son of a professor of engineering who was also a civil engineering contractor and businessman. He was educated at the prestigious École Polytechnique and graduated in 1907. He became interested in aviation and from 1908 made many balloon flights, participating in contests such as the Gordon Bennett Trophy. He lived in Dunkerque, where he was one of the founding members of the local Aéro-Club.

He became interested in powered flight and learned to fly a Wright, making his first flight on August 27th, 1909. He made modifications to his Wright machine, equipping it with wheels, and participated in the October 1909 Port-Aviation meeting, where he only made few short flights. He did better at the March 1910 Cannes meeting, where he was in the air for a total of almost one hour, but didn't win any of the contest prizes. He apparently stopped flying aeroplanes soon afterwards, perhaps as a consequence of the French Wright operation fading away. He still continued flying balloons though, and also qualified for a French balloonist license in 1910.

There's not a lot of information about his post-aviation life, but he was married twice and apparently launched into a business career. He was granted a patent for sail-boat rigging in 1930, in the beginning of 1950s the he was recorded as president of the trading company Orosdi-Back and in 1955 he wrote a book about legislation concerning commercial companies. He served in both World Wars, being finally discharged in July 1941 as "chef d'escadron de train". He received the Croix de Guerre and the Légion d'Honneur. He passed away on October 2nd, 1976.