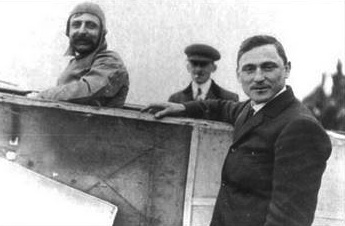 Alessandro Anzani together with Louis Blériot at the channel crossing in 1909. (1) 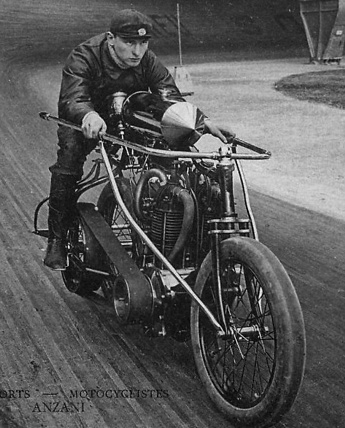 Anzani often rode pace for bicycle racers. Here he is on one of the monstrous pace motorcycles. (2) 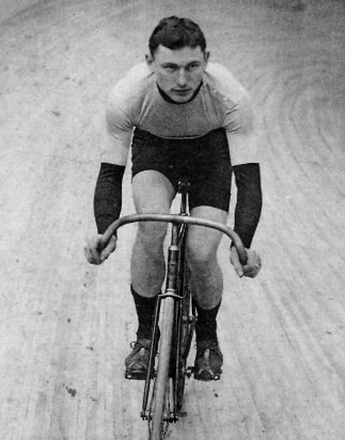 Anzani as a young bicycle racer. (2)

Alessandro Anzani was born on December 5th, 1877 in Gorla, a suburb of Milan. His father was a sewing-machine mechanic and since the family had little money his education was limited, partly by his own distaste of studying. He was very interested in mechanical things and started working at early age in a small workshop belonging to an uncle. He started racing bicycles around 1897 and was invited to France to race professionally in velodromes. In 1900, after finishing his military service he took up the offer and moved to France. He had only modest success in the velodromes and around 1902 started racing motorcycles in parallel.

He was employed by a motorcycle builder by the name of Cornet, who let him use his workshop to develop an engine. This two-cylinder engine turned out to be lighter and more powerful than competing engines. Anzani gained reputation as an excellent mechanic and was hired by motorcycle builders Alcyon. Meanwhile he continued to race motorcycles. He won many races, he set a world speed record in 1905 and won the first world championship in Belgium in 1905.

In 1906 the money that he had won in motorcycle racing enabled him to set up a small workshop at Asnieres, near Paris, where he developed new engines. In the same year he drove Ernest Archdeacon's "aéro-motorcyclette", a propeller-driven motorcycle with which he reached a speed of 80 km/h. He also built a hydroplane boat, which was successfully tested on the river Orge. The workshop in Asnieres soon became too small, but Anzani could now afford a much larger factory at Courbevoie, near Paris. He started by building motorcycles, but his engines were also used in racing boats, including his own "Anzani-Nautilus". He realized that his lightweight air-cooled engines would be suitable for the emerging airplane industry and developed the famous lightweight three-cylinder engine that Louis Blériot would use for crossing the English Channel.

Anzani learned to fly at the Voisin school at Châlons during the summer of 1909. He bought a Voisin and equipped it with one of his own engines. He brought it to the Brescia meeting in 1909, but after a series of mishaps, ending with the machine being further damaged during towing, the temperamental and frustrated pilot reportedly gave up flying on the spot and donated his damaged machine as spares to his competitors. In late 1909 Anzani built an aeroplane of his own design, a shoulder-winged monoplane with belt-driven propeller. It was not successful and he again concentrated on his engines.

The demand for Anzani engines was huge and new models were developed, from 15 hp to 1,250 hp. The Courbevoie factory was expanded and production was also started in Britain and Italy. In order to satisfy the demand he decided to license his engines to other producers. The license fees made him financially independent for the rest of his life. Anzani engines powered many airplanes during WW1, for example Caudron reconnaissance machines and the ubiquitous Blériot trainers. After the war Anzani tried to branch out into voiturette racing cars, which were quite successful and he actually raced one himself in 1924. Anzani also produced light engines for powering bicycles.

In 1927, just before his fiftieth birthday, Anzani decided to retire, tired of running factories and perhaps realizing that technology had moved beyond his self-taught skills. He sold the Courbevoie factory to Potez and bought a villa in Merville-Franceville in Normandy, where he spent the rest of his life. He never married, but had several children with three different women. He died on July 24th, 1956.