Meetings that we haven't written about... 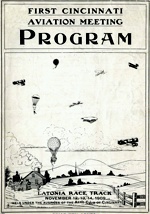 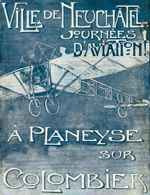 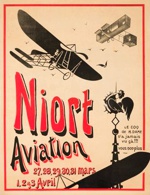 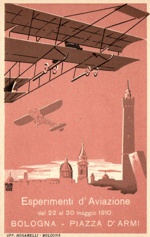 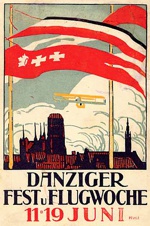 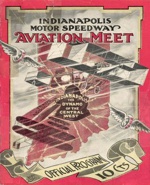 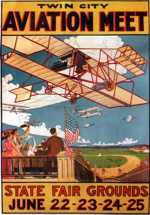 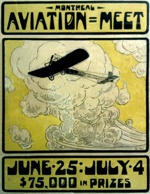 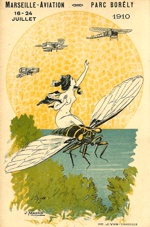 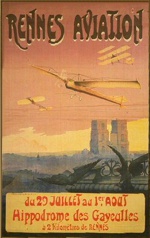 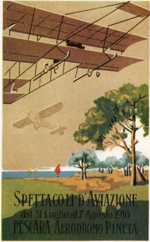 This site only covers competitive events. During the first years of aviation there were many other "aviation meetings" that either didn't include competitive events or where only a single pilot was engaged. Particularly in the USA, "air show" type events, often supported by only one of the conflicting Wright and Curtiss teams, were more frequent than actual contests. We also don't cover prizes offered for pioneering flights

Below you will find a list of some such non-competitive events, and some events that simply didn't happen. If you don't agree and can provide further information we will consider them for more detailed coverage.

Grande Semaine d'Aviation de Tournai
(Belgium, September 5th - 14th, 1909)
Prizes were announced for distance and altitude, and a list of several entrants was published, but only one pilot (Paulhan) made any flights.

Boulogne
(France, September 11th - 19th(?), 1909)
This meeting would have centered around a big prize for a double crossing of the English channel between Boulogne and Folkestone, but in the end there were no entrants. Only Ferdinand Ferber made any flights, and eventually crashed to his death on September 22nd

Grand Meeting d'Aviation
(Issy-les-Moulineaux, France, October 30th - November 1st, 1909)
No results or press reports are known from this meeting, but a nice-looking poster was published.

First Cincinnati Aviation Meeting
(Cincinnati, Ohio, USA, November 12th - 14th, 1909)
Glenn Curtiss and Charles Willard were entered and height and distance contests were announced. Due to strong winds it is uncertain whether any competitive flights were made, but Willard was awarded both prizes.

La Crau
(Miramas, France, March 27th - April 3rd, 1910)
Métrot, Noguès, "Hauvette-Michelin" and Dufour made several flights in order to celebrate the opening of the airfield at La Crau. The meeting was hit by bad weather and rioting crowds, and no competitive events are known.

The "Daily Mail" London-Manchester Prize
(UK, April 27th - 28th, 1910)
The almost simultaneous flights of Paulhan and Grahame-White are often described as a race. It was, however, a prize set up for a pioneering flight and not a competitive event.

Atlanta Aviation Meeting
(Atlanta, Georgia, USA, May 2nd, 1910)
Charles Hamilton was the only flyer present. He made several flights and raced an automobile.

Meeting d'aviation de Bordeaux
(Bordeaux, France, May 7th - 9th, 1910)
A national meeting was announced in the aviation press already during the winter, but apparently never came off.

Meeting d'Aviation de Vichy
(Vichy, France, June 5th - 12th, 1910)
A national meeting was sanctioned by the French Aéro-Club and still appeared in lists published in May. There are no reports in the aviation press of any flights in Vichy on those dates, so the meeting was probably cancelled or postponed.

La Crau
(Miramas, France, June 12th - 19th, 1910)
Daniel Kinet, Léon Cheuret and Edouard Dufour, and one or two other pilots, made several flights, but no competitiive events are known.

Montreal Aviation Meet / Concours d'Aviation de Montréal
(Montreal, Canada, June 25th - July 5th, 1910)
A list of no less than seventeen contests was published before the meeting, but neither the aviation press nor the newspapers published anything that looked like a list of results. De Lesseps, the Wright display team (Brookins, Johnstone, LaChapelle and Coffyn) and a couple of other flyers made 75 flights, the most notable being de Lesseps' 49-minute cross-country flight over downtown Montreal.

Toronto Aviation Meet
(Toronto, Canada, July 8th - 16th, 1910)
Most of the participants of the Montreal meeting continued to Toronto for a similar event with five participating flyers. No competitive events are known. Again de Lesseps made the most notable flight, a 28-minute cross-country flight over central Toronto.

First National Aviation Meeting for Novices
(St. Louis, Missouri, USA, July 11th - 17th, 1910)
The first US event where entrants payed a registration fee and were not paid to participate. Eight planes were entered, but in the end only two flew, with J. W. Curzon winning three prizes. No competitive events are known.

Marseille Aviation
(Marseille, France, July 17th - 31st, 1910)
The meeting was originally intended to last a week, but it was extended because the mistral hit the first week. Fischer, Aubrun, Cheuret, Wallon and Édouard Dufour flew from a field at Parc Borely, together with Jeanne Herveux, who became the second woman to fly at a an aviation meeting. A couple of competitive events were announced in the press, but no published results are known.

Toulouse Aviation
(Toulouse, France, July 30th - August 1st, 1910)
Audemars, Cheuret, Herveux, Kuhling, Niel and Marcel Granel made flights during three days, together with a couple of local flyers. A list of prizes was published, but no results are known are known.

Spettacolli d'Aviazione
(Pescara, Italy, July 31st - August 7th, 1910)
René Barrier and André Frey made flights at an airfield in Pineta. Reports mention prizes for altitude and distance, but no results are known..

Back to the top of the page