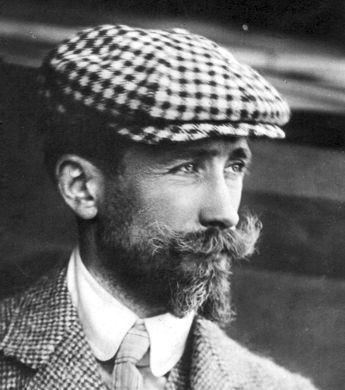 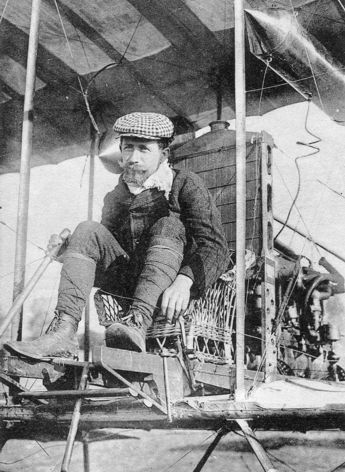 Roger Sommer in the lovely little wicker seat of his Vivinus-engined Farman. The photo was probably taken before the 1909 Reims meeting. (2)

Roger Sommer was born on August 4th, 1877 in Pierrepont in the department Meurthe-et-Moselle in Lorraine. He came from a textile industry family. At the age of 18 he was a successful bicycle racer, winning the 200 km "Petit Ardennois" race and becoming champion of eastern France over 100 km. He was interested in mechanics from early days and graduated from an engineer education at the École des Arts et Métiers. He built two cars of his own construction and owned a powerful six-cylinder car.

Inspired by the Wrights he built a pusher biplane in 1908 and made some short and not very successful flights in early 1909. He instead bought a Farman plane in May 1909 and flew it for the first time on July 4th. The next day he made a flight of half an hour and soon made longer and longer flights. On August 7th he flew for 2 h 27:15, beating Wilbur Wright's world endurance record. He participated with some success in the 1909 Reims, Spa and Doncaster meetings, before selling his plane to Belgian Daniel Kinet in December 1909.

Sommer started designing and building his own airplanes in 1910. The first were basically modified Farmans, which in the hands of Georges Legagneux and several other pilots were quite successful during the 1910 meetings. It was reported that in the spring of 1910 he had orders for 58 planes. He kept on developing the biplanes in several different versions, one of them carrying twelve passengers using only a 70 hp engine in March 1911. He then designed a monoplane that was successful in several meetings across Europe in 1911 and 1912.

In 1913 Sommer closed his aviation business. The company had then produced 182 planes and 36 pilots had qualified for their licenses at its flying schools. The reason given was dropping sales, partly caused by losing a competition for a big Army contract to Farman, but Sommer watching the deaths of two employees in accidents was probably a contributing factor.

In 1916 he returned to aviation as a licence manufacturer, but after the end of the war he left the aviation field for good, concentrating on the family felt manufacturing business in his home town of Mouzon. The family company still exists. Under the name of Sommer-Allibert S.A., it diversified into several fields of industry, for example artificial lawns, plastic household products and components for the car industry, before focussing on flooring products under the name of Tarkett, one of its subsidiaries.

Roger Sommer passed away on April 14th, 1965 in Sainte-Maxime in southern France.