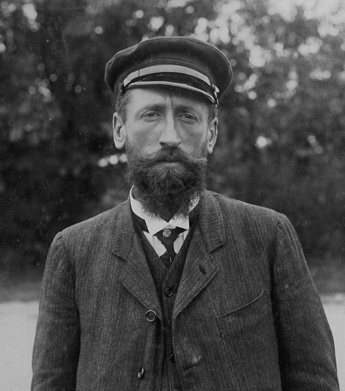 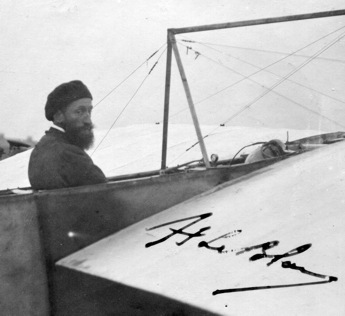 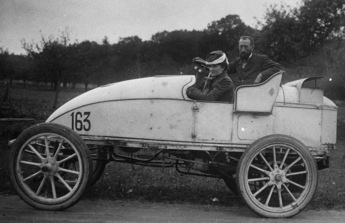 Hubert Le Blon was born in Boulogne-Billancourt, a suburb west of Paris, on March 21st, 1874. He had engineering education and between 1898 and 1900 built "voiturettes" together with his brother under the name "Le Blon Frères", also sold as "Lynx" in Britain. Le Blon developed a successful carburettor for alcohol engines which was used in lightweight racing cars and thereby came in contact with Léon Serpollet, who built steam-powered cars.

In 1902 - 1907 Le Blon participated in many automobile races for Gardner-Serpollet, Hotchkiss, Panhard, Isotta-Fraschini, Thomas and De Luca-Daimler, winning the hill climbs of Côte de Gaillon in 1902 and Namur-Citadelles in 1904. His wife Motann Le Blon often accompanied him as a riding mechanic, but she also drove racing cars herself and actually beat her husband in a 500-metre competition at Deauville in 1903. His last automobile race was the July 1907 French Grand Prix, where he was severly injured and had to go through several months of convalescence.

In 1908, after recovering, he turned to aviation and became a pupil of Léon Delagrange, making his first flight in a Blériot XI on September 18th, 1909. His first competitive event was the 1909 Spa meeting less than two weeks later, where he made the longest non-stop flight. This was followed by the Doncaster meeting, where he gained many fans by his fearless flying in windy conditions and by a miraculous crash where he managed to avoid coming down in the middle of a spectator area.

In early 1910 the Humber Ltd of Coventry displayed a monoplane designed by Le Blon at the London Olympia aviation exhibition. It was quite an inventive plane, with a slim tubular monocoque fuselage on which the pilot sat astride, but the development apparently led nowhere.

Le Blon competed on his own in the February 1910 Heliopolis meeting, having taken over Delagrange's machines after his death five weeks earlier. He made the third longest flight of the meeting and set an official 5-kilometre speed record.

From March 27th, 1910 Le Blon made a series of flights at the Ondarreta beach in San Sebastián in northern Spain. On March 29th he ditched in the water, but was saved. He was not as lucky on April 2nd. After a short flight over the sea his machine developed engine problems and as he turned back towards the beach a rigging wire broke and a wing collapsed. The plane crashed inverted from relatively low altitude, trapping the pilot below the surface. It happened close to the shore, but before help could arrive Le Blon was dead. He had also been injured by the crash, but it was declared that the cause of death was drowning. He was the fifth pilot to lose his life in an airplane accident.