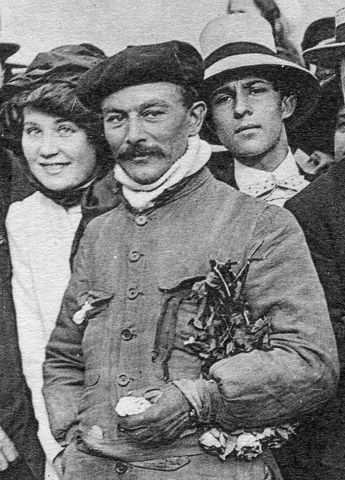 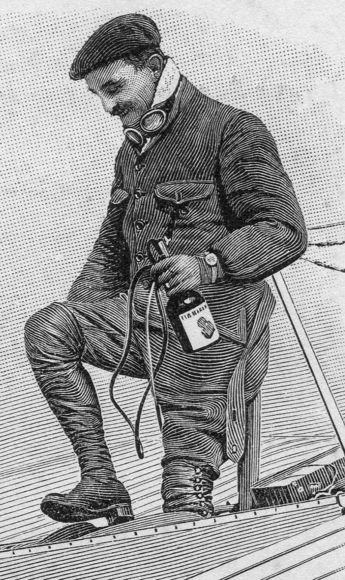 Alfred Leblanc appearing in an ad: "When I was ill at Troyes, it was thanks to Mariani Wine that I could continue the Circuit de l'Est and win". Different times indeed... (2)

Alfred Leblanc was born in Paris on April 13th, 1869. He studied metallurgical engineering and from 1888 worked as a manager in the metal-working industry. He was a sportsman and active in a Paris gymnastic society. In 1904 he became interested in ballooning and came to make hundreds of flights. He participated successfully in several balloon races, the most spectacular perhaps the 1912 Gordon Bennett Trophy, where his balloon lifted off in Stuttgart and landed south of Moscow after a world record beating flight of more than 2,000 kilometres, but only good enough for second place.

He became a friend and customer of Louis Blériot and a trusted partner of the famous pilot. He was an excellent organizer and administrator and it was much thanks to him that Blériot's successful flights and industrial efforts were possible.

However, he was also an active pilot and participated in many meetings, starting with the 1909 Reims meeting. He would probably easily have won the 1910 Gordon Bennett Trophy race for Blériot if he hadn't run out of fuel and crashed into a telegraph pole, and he won the 1910 Circuit de l'Est, the first great cross country race. In 1911 he set an absolute world speed record at 125 km/h in a Blériot XXIII.

After brief service as an instructor for privates during WW1 he returned to the direction of the Blériot/SPAD industries, becoming general manager of the Blériot factory at Suresnes. After the war he became responsible for winding down and liquidating most of the Blériot/SPAD operations. In 1919 he became manager of the airline "Compagnie des Messageries Aériennes", set up by a conglomerate of airplane manufacturers, and of the "Société des Stocks", which was formed to dispose of surplus aviation materiel from the war.

Alfred Leblanc died of a heart attack on November 22nd, 1921, according to his employees worn out by his relentless work during and after the war.

He qualified for French "Brevet de Pilote" No. 17 on December 16th, 1909, He was the first to be granted the license after examination, rather than an evaluation of past achievements.