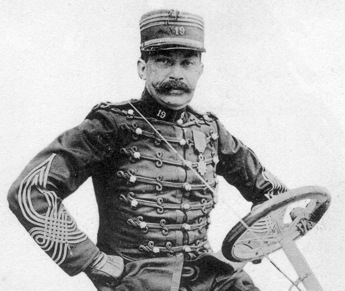 Capitaine Ferber in the uniform of his artillery regiment (1) 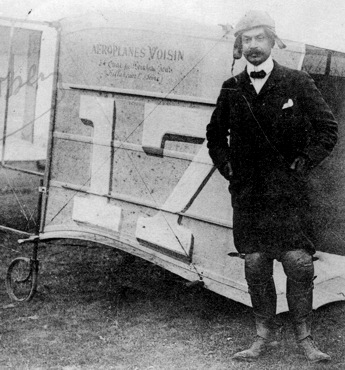 "F. de Rue" standing by the tail of his #17 Voisin, probably at the 1909 Reims meeting, but the plane still carried the same race number until the fatal crash. (2)

Louis Ferdinand Ferber was born in Lyon, France on February 8th, 1862. He studied at the École Polytechnique and became an artillery officer, eventually becoming professor at the artillery school at Fontainebleu. In 1898 he became interested in gliding and built his own gliders, corresponding on the subject with the Wright brothers. In 1905 he started experimenting with powered gliders and built several rather unsuccessful planes of his own design.

In 1906 he took a three-year leave from the army and started working at Société Antoinette, where he built his final powered airplane, No. 9, which flew in July 1908, piloted by Georges Legagneux. In 1909 he bought a Voisin and entered a couple of the earliest air race meetings. He flew under the pseudonym "F de Rue" in order not to compromise his military career. The name was taken after the Swiss village of Rue, where the family owned an estate.

His main input into aviation was perhaps not his flying or his technical exploits, but his early understanding of the importance of the work of the Wright brothers and his fervent support of aviation. He was one of the founders of the Ligue Nationale Aérienne.

Ferber was killed on 22 September 1909, when he was hit by the engine of his Voisin when it nosed over after running into a ditch after a landing outside Boulogne-sur-Mer. He was the world's second pilot to lose his life in an airplane accident.

When the first French "Brevets de Pilote" where granted in 1910, Ferber posthumously received No. 5 bis, based on the alphabetic order between the first fourteen holders.