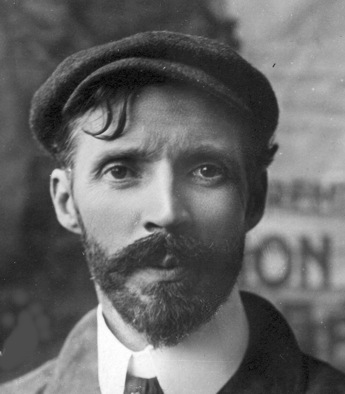 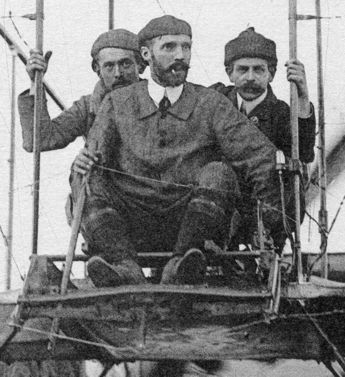 Henry Farman and his two passengers, ready to take off on the winning flight in the 1909 Reims "Prix des Passagers". (2) 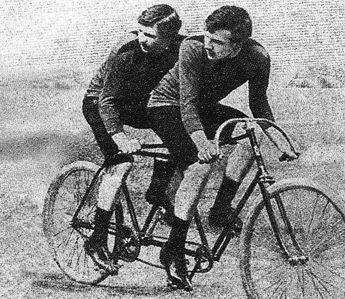 The Farman brothers, Henry and Maurice, on their tandem. (2)

Henry* Farman was born in Paris on May 16th, 1874, second of the three sons of a relatively wealthy English journalist and a French mother. Like the Wright brothers he started his career by selling and racing bicycles. During the middle if the 1890s he won several prizes and records. He was French champion in 100 km road racing in 1892 and he and his younger brother Maurice was a famous tandem pair, setting a speed record in 1894.

He then went on to motorcycles and from the end of the 1890s to cars. He became a well-known and successful automobile racer, for example winning his class in the the Paris-Vienna race in 1902, driving a Darracq. While recuperating after injuries suffered in an accident during the 1904 Circuit d'Auvergne he discovered aviation, which appealed to him because he considered it safer than auto racing.

He initially couldn't afford to get into flying, but he started a company building coachwork for cars and in two years made enough money to order an airplane from the Voisin brothers, on the advice by aviation patron Ernest Archdeacon. With it, he became the first European to fly, on October 7th, 1907. On January 13th, 1908 he won the 50,000 francs Deutsch-Archdeacon prize for the first closed-circle flight of a kilometre in Europe. On October 30th, 1908 he made the first cross-country flight, between Mourmelon (Bouy) and Reims.

In the spring of 1909 Farman broke his partnership with the Voisin brothers after they had sold a plane that he had ordered to the British flyer John Moore-Brabazon. Afterwards he built his own planes, with several improvements, for example ailerons, better landing gear and simplified structure and tail surfaces. After his successes at the 1909 meetings, for example braking the world endurance record at Reims, he focussed on the design and production of the planes carrying his name. In 1910 the robust and manoeuverable Farman biplane was the most successful type in competitions.

From 1912 he formed a company together with his brothers Maurice and Dick. The Farman brothers built more than 200 types of airplanes and several types of engines. They were also pioneers in commercial aviation, launching "Lignes Farman", one of the first airlines, in February 1919. Their company survived until 1937, when it was nationalized. After losing control of their company they continued at a smaller scale, building Stampe trainers under license. After WW2 the Farmans tried to get into light aviation, without much success, and the 1956 F 521 "Monitor III" was the last plane to carry the Farman name.

Although a British citizen by birth, Henry Farman always regarded himself as a Frenchman. He officially became a French citizen in 1937. He passed away in Paris on August 18th, 1958.

When the first French "Brevets de Pilote" where granted in 1910, Henry Farman received No. 5, based on the alphabetic order between the first fourteen holders.

* His given name was "Henry", with English spelling. In French magazines of the time both this and the French version "Henri" was used. When becoming a French citizen he officially changed to French spelling.