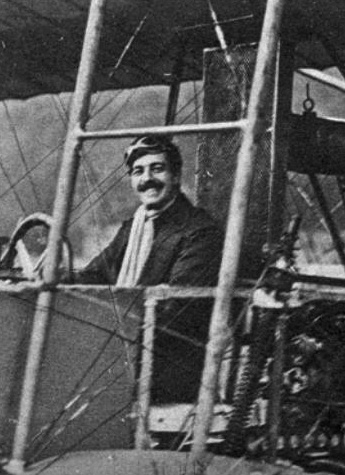 Emilio Edwards Bello was born in Santiago in 1891, into a wealthy and influential family with interests in industry and banking. It was intended that he should study medicine, but while travelling in Europe in 1908 he met fellow Chilean José Sánchez Besa and they decided to buy airplanes and learn to fly at the Voisin school.

Their first aviation meeting was the 1909 Grande Semaine of Reims, where their brand new and untested machine refused to leave the ground. At the second meeting, in Berlin a month later, Edwards crashed but escaped almost uninjured. During the Hamburg meeting in November he crashed into a tree and had to be helped down by the fire brigade, suffering a deep cut in the lip. The German doctor offered to enlarge the wound, so that it would look like an impressive duel scar, but Edwards declined.

After this accident the family ordered him to give up flying and return home. He then launched into a successful diplomatic career, serving in different functions in Belgium (at the outbreak of World War 1), Austria, Britain, USA, Ecuador, Colombia and Brazil and finishing as ambassador in Cuba during the revolution. He spent his last years in Miami.

If you know more about this pilot, please let us know so that we can improve the text!