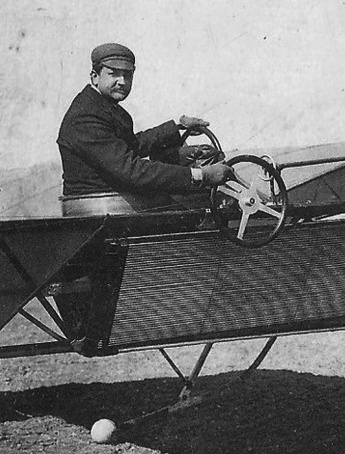 Demanest at the control wheels of an Antoinette, probably in early 1909. (1)

René Demanest (1881-1947) was a sportsman who tried his hands at many sports, such as fencing, riding, skating, swimming and bicycle racing. After completing his studies he turned to automobiles. He became interested in the light Antoinette engines and started working for the company.

Originally his intention was to use the engines in automobiles, but he then became interested in aeroplanes. He was the second customer to order an Antoinette, in late 1908, and was employed as a test pilot by the company before being overshadowed by Latham. He was injured in a crash at Mourmelon on July 11th 1909 and appears to have quit active flying soon afterwards, becoming a manager at Antoinette.

He was entered at the 1909 Reims meeting and his #12 machine was flown there at least in the days before the meeting, but his name was not mentioned in any reports of the meeting itself.

During the spring of 1910 he split with the Antoinette company and started selling Sommer planes.

He never qualified for a "Brevet de Pilote".