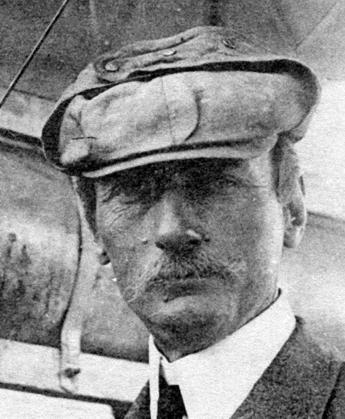 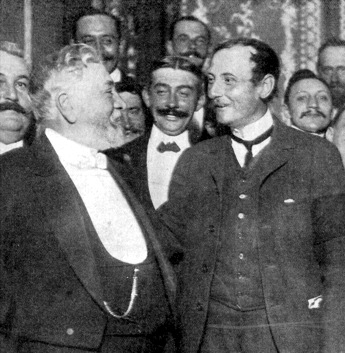 Gustave Eiffel congratulating de Lambert during the celebration of his famous flight from Port-Aviation to the Eiffel Tower and back on October 18th, 1909. (2) 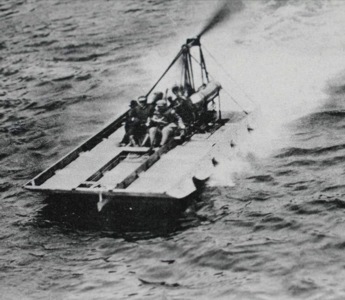 One of de Lambert's hydroplane boats, this one powered by a 14-cylinder 140 hp Gnôme rotary. (3)

Charles Alexandre Maurice Joseph Marie Jules Stanislas Jacques Comte de Lambert (from 1924 Marquise) was born on December 30th, 1865 in Funchal on the Island of Madeira. His father, who died before he was born, was a Russian aristocrat of a family that had fled France during the French revolution and his mother was from France. His family moved to France in 1867, where he would spend his entire life. Little is known about his education, but he appears to have studied law and engineering. He was interested in shooting and won prizes in competitions.

From 1885, and for most of his life, he worked on developing hydroplane boats driven by air propellers, but he was also interested in flying. In 1893 he participated in the fruitless experiments with the giant Maxim aeroplane. In 1894 he bought a glider from Otto Lilienthal, but he hardly ever used it.

Having realized that this was the best opportunity to fly, he became the first European to be trained by Wilbur Wright and flew solo in Pau on March 18th 1909, after five hours of training. Because of the illness and death of his mother he missed several of the 1909 meetings. He participated in the 1909 Reims meeting and did reasonably well, but his great moment of fame was the flight around the Eiffel Tower during the October 1909 Grande Quinzaine d'Aviation de Paris.

In late 1909 he was fired by the French Wright producers, but he kept his airplanes and started a flying school in Villacoublay during the spring of 1910. Although experimenting with Wright-based seaplanes until 1913, he went back to the hydroplane boats. In 1913 one of his boats, driven by his business partner and fellow Wright pilot Paul Tissandier, set a world water speed record of 98.6 km/h using a 160 hp engine. In 1914 Jacques Schneider, of Schneider Trophy fame, made an expedition along the Nile in a de Lambert hydroplane. During WW1 de Lambert and Tissandier sold hydroplanes to the armed forces of France, Britain and the USA, and many were used in the colonies. In 1918 he formed the "Société Anonyme des Hydroglisseurs de Lambert" together with Paul Tissandier.

The company continued producing hydroplanes until 1931, for example for the Suez Canal authority and for the French government for use in Indochina. However, de Lambert was more engineer than businessman. His inherited money had run out and the company constantly lost money and finally went bankrupt in 1941. De Lambert was already deeply in debt and his health was failing. Tissandier also lost everything in the bankruptcy.

Marquise Charles de Lambert passed away on February 26th, 1944, penniless and forgotten, in a nursing home in Saint-Sylvain d’Anjou.

When the first French "Brevets de Pilote" where granted in 1910, de Lambert received No. 8, based on the alphabetic order between the first fourteen holders.