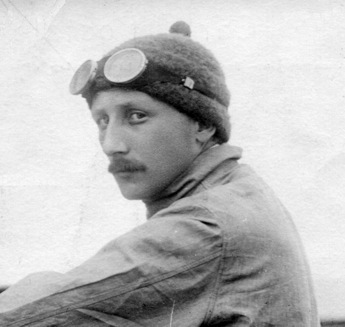 Delagrange wearing his "trademark" grey woolen bobble hat, in the cockpit of a Blériot XI, probably during the 1909 Reims meeting (1) 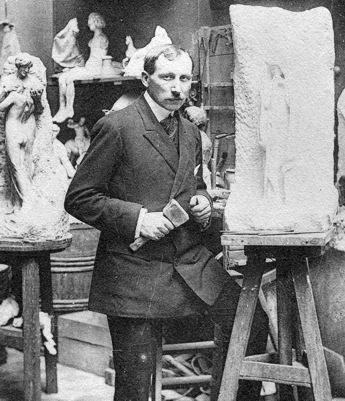 Delagrange the sculptor in his studio, tools in hand (2)

Ferdinand Léon Delagrange was born in Orléans in central France on March 13th, 1872, son of the owner of a textile factory. Before becoming a pilot Delagrange was a famous sculptor. He had studied at the Academie des Beaux Arts in Paris and was represented at several exhibitions. In 1907 he became interested in flying and became one of the true pioneers of powered flight. He was the first to order an aeroplane from the Voisin brothers, enabling them to get established as manufacturers.

In 1908 he toured Italy and made flight demonstrations. During these he on 8 July made the world's first flight with a lady passenger, his partner and fellow sculptor Thérèse Peltier. Later during the year he set distance and endurance records.

He participated in the world's first air race at Port-Aviation on 23 May 1909, and a further couple of race meetings during that year. In addition to his original Voisins he also bought three Blériot XIs, and formed a team by recruiting Hubert Le Blon, Léon Molon and Georges Prévoteau. He also flew in several non-competitive meetings. He was the first to equip a Blériot XI with a 50 hp Gnôme engine in place of the 25 hp Anzani, thereby doubling its power.

Léon Delagrange was killed on January 4th, 1910, during a display at Croix d'Hins outside Bordeaux, when his Gnôme-engined Blériot XI lost a wing. He was the world's fourth pilot to lose his life in an airplane accident.

When the first French "Brevets de Pilote" where granted in 1910, Delagrange received No. 3, based on the alphabetic order between the first fourteen holders.