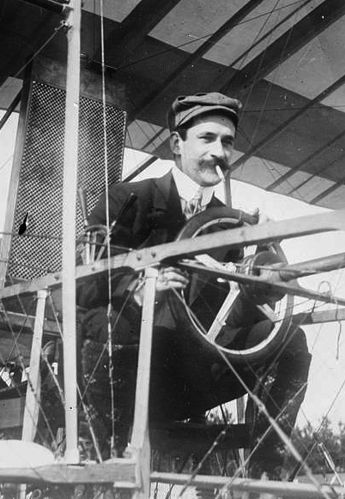 De Caters at the wheel of his Voisin. (1) 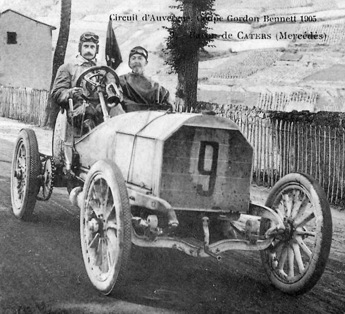 Baron de Caters in his Mercedes during the 1905 Gordon Bennett race. (2)

Pierre Henri Marie Amédée Baron de Caters de Bosschaert was born on December 25th, 1875 in Berchem outside Antwerp. He was the son of an Antwerp businessman, from which he inherited his noble title in 1884. In his youth he practiced tennis, fencing, cycling and other sports, and after a brief effort at a military career he started an electrical engineering education.

In 1897 he unexpectedly inherited an enormous fortune, reportedly worth the then fabulous sum of six million francs, after a distant aunt. After winning a three-year court fight with his relatives over the validity of her will he started spending the money on cars, motorboats and aeroplanes. He participated in many automobile races in several types of cars and eventually became a factory driver for Mercedes. His biggest win was the 1905 "Tour des Ardennes". In 1904 he briefly held the absolute speed record of 156 km/h, set at Ostend in Belgium with a 90 hp Mercedes. His boat "Sea Sick", powered by a Mercedes-Sunbeam engine, reached a record 50.4 km/h over a kilometre in 1904.

His interest then turned to aviation and he became Belgium's first pilot. In 1908 he ordered two planes from the Voisin brothers, one triplane and one biplane, and built a private airfield at the family palace in 's-Gravenwezel near Antwerp. He made his first flights, in the triplane which he soon abandoned, during the second half of October 1908. From the autumn of 1909 to late 1910 he participated in several meetings and bought four more Voisins. He also performed in several towns in Eastern Europe and in Turkey and Egypt.

In February 1910 he started building his own planes under the name "Aviator", together with the brothers Eugène, Joseph and Isidore Bollekens, who ran a woodworking business and first learned to know him when repairing his planes after his several crashes during the 1909 Antwerp meeting. He also participated in the training of the first Belgian Army pilots. In late 1910 he went to Asia together with fellow Belgian pilot Jules Tyck, flying in several towns in India and marketing his planes.

By 1911 his inherited money had run out. He retired from aviation and was forced to sell his part of the Aviator company. During WW1 he volunteered as a pilot and became commander of a flying school, with the rank of lieutenant. When he left the armed forces in 1917 he started a company for production of peat fuel briquettes. He died in Paris on March 21st, 1944.

On December 3rd, 1909 he became the first to be granted a pilot license from the Belgian Aero-Club.