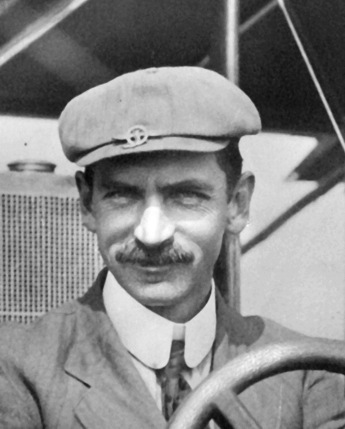 Curtiss was not known for his friendly personality but here he flashes a smile for the photographer, at the wheel of his "Rheims Flyer". (1) 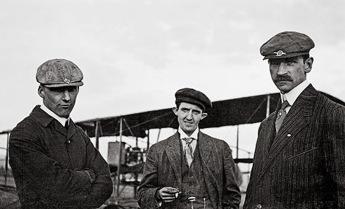 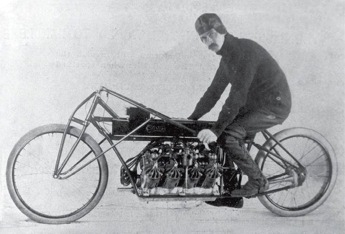 Curtiss on his 1907 record-breaking motorcycle. (3)

Glenn Hammond Curtiss was born in Hammondsport, New York on May 21st, 1878. He was the son of a harness-maker who died when Glenn was four years old. He didn't have much education, but worked at Eastman Kodak in Rochester where the family had moved. He started bicycle racing in his youth and eventually became champion of western New York. After returning to Hammondsport he worked at a bicycle shop before he established his own business.

Seeking more speed, he built his first motorcycles in 1901. He had great success racing them and in January 1907 reached 219.3 km/h (136.3 mph) on a motorcycle powered by a 40 hp air-cooled V-8 engine of his own design. This unofficial record stood for more than twenty years and made Curtiss the fastest man on the planet, on any kind of vehicle.

Curtiss' engines were used in airships and in 1907 he was asked by Alexander Graham Bell to provide an engine for airplane experiments. Curtiss joined Bell's Aerial Experiment Association (AEA), which built four aircraft. He made his first flight in one these, the "White Wing", on May 21st. 1908. The success of the following designs resulted in Curtiss being selected by the Aero Club of America as the US representative in the first Gordon Bennett Trophy.

After returning from the Reims and Brescia meetings he built up his own airplane company, during constant legal battles with the Wright brothers and his ex-partner Augustus Herring. In 1910 he won the New York World prize of $10,000 for the first successful flight between Albany and New York City, following the Hudson River. He participated in a couple of further aviation meetings, but mainly left exhibition and competition flying to employed pilots.

During WW1 Curtiss built thousands of "Jenny" trainers and flying boats. In 1921 he stepped back from active management and turned to real estate development in Florida. He died in Buffalo, New York, on July 23rd, 1930 from complications of an appendicitis operation, while still involved in a lawsuit with Herring's heirs.

When the first French "Brevets de Pilote" where granted in 1910 Curtiss received No. 2, based on the alphabetic order between the first fourteen holders. He later received US Pilot's License No. 1.