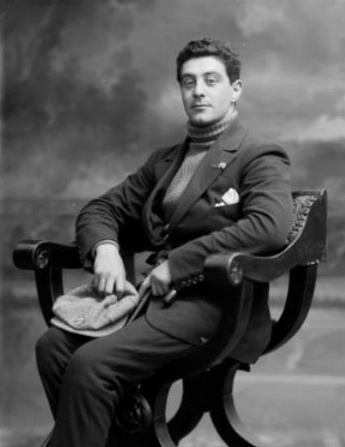 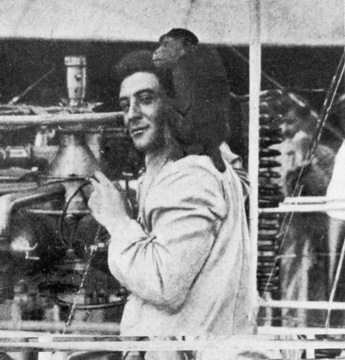 Cobianchi and his mascot at Brescia. (2)

Mario Cobianchi was born in Bologna on 8 April 1885 into a wealthy family, his father owning a liquor factory. He initially studied violin, but soon became interested in the new technology that emerged at the beginning of the 20th century. He began to participate in cycling races, then moved on to motorcycling, then to balloon flying and in 1907 qualified for a balloon pilot's license. He also began racing cars, which brought him to the USA, where he attended flights of the Wright brothers in North Carolina. This experience motivated him to devote himself to building own flying machines on his return to Italy.

His first aircraft, a combined biplane and helicopter, was tested in September of 1909 at the Brescia meeting. The unsuccessful development and testing of the complicated machine was costly and he had several accidents and incidents. In 1910 he decided to go to France instead, to attend a regular flying school and buy a standard airplane, a Farman. Back in Italy he completed his piloting course and was granted his license on 13 November 1910. He then began to attend national and international aviation meetings. His most famous flight was probably the first flight above the Leaning Tower of Pisa, on 22 January 1911. The day after he crashed during a passenger flight and broke a leg.

After recovering from the accident, he resumed his flying activities and served as a volunteer pilot in the Italo-Turkish war in Libya. In September 1913, following a request from the military authorities, he went to Russia as a flight instructor for six months. After a period of military service at the "Direzione Generale del Battaglione Aviatori" and then at the "Comando Supremo" during World War 1, Cobianchi moved to the USA in November 1917, where he served as manager of the Parisano Aerial Navigation Company and the Aircraft Engineering Corporation, where he was involved in design and testing of aircraft. After the war, he was involved in a Civil Aviation Commission in Washington.

In 1919 Cobianchi returned to Italy. He became an official in aviation organisations and represented Italy in international aviation events and served as a secretary of the Italian aviation attaché in USA. When World War 2 broke out he had to return to Italy and in 1943 he wrote the book "Pionieri dell'aviazione italiana 1908-1914" about the first years of Italian aviation. He died in Rome on January 15th, 1944.