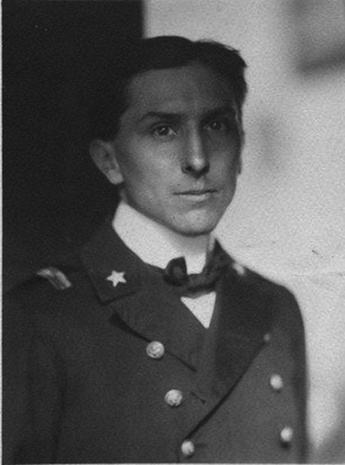 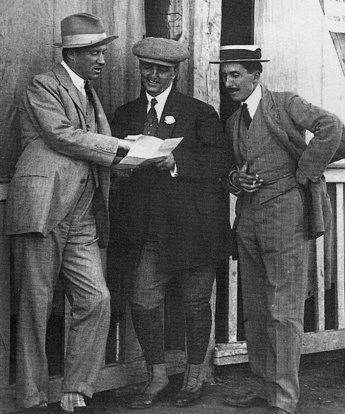 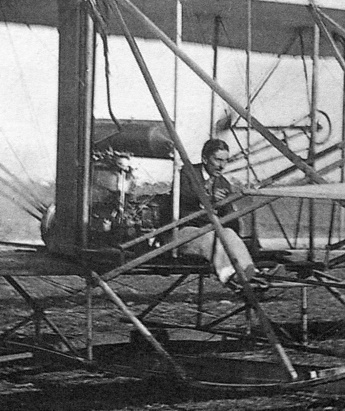 Calderara at the controls of his Wright at Brescia. (2)

Mario Calderara was born in Verona on October 10th, 1879, the son of an army officer. From early days he was attracted by life at sea and entered the Naval Academy in Livorno in 1898, where he graduated as midshipman in 1901. He became interested in aviation and made some experiments in 1903 and 1904 with primitive gliders. He also performed aerodynamic experiments together with the Italian engineer Canovetti. In 1905 Calderara wrote to the Wright brothers after hearing about their successful flights. He was positively received and the correspondence was the basis of lifelong relationship with the Wrights.

In 1906 Calderara got permission from the Italian Navy to carry out experiments with a float-equipped glider towed by a motorboat. His experiments continued until an accident in 1907, when the glider crashed and he was pulled down into the water by its wires. He was taken to hospital half-drowned and slightly injured, whereupon the Navy declared the experiments too risky and forbid him to continue.

In 1908 Calderara was granted a six months leave in order to work for the Voisin brothers. He had assisted in the design of several airplanes when Ambroise Goupy, a wealthy Frenchman, offered to fund the development of a tractor biplane. The machine, the "Calderara Goupy", flew in March 1909, the first successful machine of its configuration.

After the sensational demonstration of the Wright Flyer in France in 1908 the Italian Aero Club invited Wilbur Wright to Rome. They offered to purchase an airplane and asked him to train one or two Italian pilots. Calderara was selected as the first trainee. Wilbur Wright came to Rome in April 1909 and gave some lessons to Calderara and Umberto Savoia. After Wright's departure, Calderara made several flights before crashing on May 6th. He was concussed, but after recovering in the hospital, he and Savoia repaired the machine and he resumed flights.

Calderara was allowed to use the Wright at the September 1909 Brescia meeting. He suffered a bad setback when the machine was badly damaged when a hurricane blew down its hangar nine days before the start of the meeting. He was offered a second example by Ariel, the French Wright licensees, and despite several accidents and incidents and much repair work he won second most prize money after Glenn Curtiss. Based on his performance at Brescia he was granted Italian pilot's licence No. 1.

Calderara's fame did apparently not sit well with the military establishment. It was intended that he would train pilots on the Calderara Goupy, but in the autumn of 1910 the plane was damaged beyond repair by being stored in the open. Shortly afterwards he was assigned to the Ministry of the Navy, where he had nothing to do with flying. Calderara applied to the Admiralty for permission to build an airplane that could take off and land on water. The seaplane flew successfully in the spring of 1912, carrying three passengers.

As World War 1 approached, the Italian Navy again forced Calderara to leave aviation and return to naval assignments. During the war he served on several warships and ultimately commanded a torpedo ship in the Adriatic. Towards the end of 1917 he became commander of a new seaplane flying school for American naval officers. The school was active throughout 1918 and until July 1919 with no casualties. This was an exceptional demonstration of safety and skill in those days, and Calderara was decorated by the US Navy.

Between 1923 and 1925 Calderara was assigned to the Italian embassy in Washington as air attaché. After returning to Italy he decided to leave the Italian Navy, where he felt he had many enemies and no opportunities. He moved to Paris with his family and worked as representative for US aviation corporations. In 1939, when World War 2 broke out, Calderara had to move again and seek protection in Italy. His house near Paris was expropriated as enemy property, and the family suffered further financial losses. On March 18th, 1944, worn out by these challenges and in bad health because of a life of chain smoking, he died suddenly in his bed.

Calderara was granted Italian pilot's license No. 1 on September 12th, 1909.