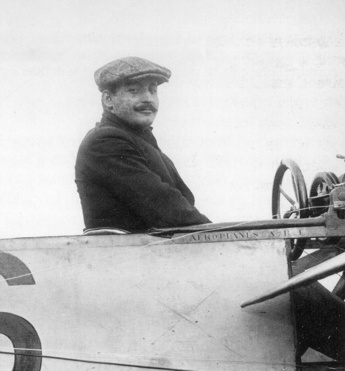 Albert Bonnet-Labranche in the cockpit of his machine at the October 1909 Port-Aviation "Grande Quinzaine. (1) 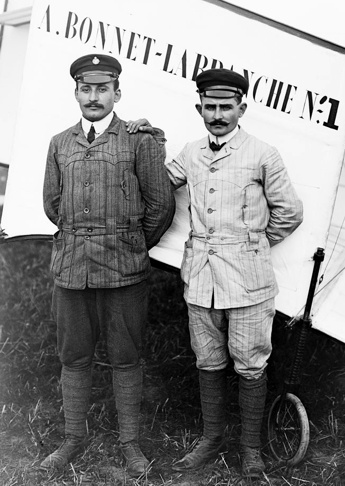 Albert (left) and Émile Bonnet-Labranche in 1907, at the tail of their unsuccesful first machine. (2)

Albert Casimir Marius Bonnet-Labranche was born in Toulouse on September 10th, 1883, the son of an architect and engineer. Aviation ran in the blood of Albert and his younger brother Émile. Their father had tried to build a flying machine already in 1869, and also built a balloon that was used in the 1870-1871 war.

After finishing his studies and military service he moved to Paris and together with his brother formed "Aéroplanes Bonnet-Labranche". They designed and built their first machine already in 1907, a biplane with a characteristic big long-chord top wing that joined with the horizontal tail, but it never flew. In 1909 they partnered with Charles Roux of Saint-Die to form AVIA, who built several more or less unsuccessful designs.

At the October 1909 Paris "Grande Quinzaine" Albert Bonnet-Labranche entered a monoplane, the fourth "ABL" design, but it was untested and only managed short, straight flights. This was his only appearance at an aviation meeting.

The Bonnet-Labranche brothers were involved in all kinds of aviation-related business. They established the "Aéro-Garage" in Paris, where they bought, sold, built, repaired and shipped aeroplanes. In the end of 1910 they claimed to have 31 aeroplanes of different types in the 2,200 square metre halls of the "Aéro-Garage", and their inventory of machines, engines and spare parts was valued at 512,000 francs. The brothers also published the fortnightly magazine "L'Aviation Illustrée" and manufactured and sold model airplanes. They started flying schools and built hangars at Issy-les-Moulineaux, in Orléans and in Oran in Algeria, and they had big plans for several more schools in France, Belgium and China, which in the end were never realized. They designed seven types of airplanes of different configurations. The last types, Blériot-inspired monoplanes, were produced in several examples during 1911 and flown successfully in many meetings, particularly by Louis Janoir.

Albert moved to Algeria around 1911 and ran the flying school there. It appears that the other Bonnet-Labranche aviation businesses were sold or wound down in the end of 1911, but the "Aéro-Garage" reportedly still existed in 1913.

Albert Bonnet-Labranche was drafted into the infantry when WW1 started, but soon transferred to the air forces. He qualified for his military "brevet" on April 1st, 1915 and served as a pilot with the rank of sergeant. He was wounded on July 18th, 1915 when his machine was attacked by a German fighter during a reconnaissance mission. Despite being hit in the leg he managed to bring his bullet-ridden Voisin LA back to the base, earning a citation. Later during the war he proposed a four-engine triplane long-range bomber to the war ministry, but nothing came out of it.

Little is known about Bonnet-Labranche's life after the end of the war, but it appears that he spent most of his life in Algeria. In 1943 he went missing there, together with the plane he was piloting.

Bonnet-Labranche did not qualify for a pilot's license before WW1.